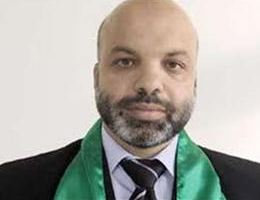 Israeli soldiers kidnapped on Monday Jerusalem legislator of the Change and Reform Block of Hamas, Ahmad Attoun, as he was in front of the protest tent that was installed in front of the Red Cross in Jerusalem more than a year ago.Israeli Police Spokeswoman, Luba Samri, stated that undercover units of the Israeli Border Guard Police in Jerusalem, and a number of informants, arrested Attoun as he was near the entrance of the Red Cross headquarters in the city.

Samri added that Attoun is currently under interrogation, and that his Jerusalem ID card was revoked a year ago by the Israeli Ministry of Interior for “his involvement with the Hamas movement”.

It is worth mentioning that Jerusalem Legislators Ahmad Attoun, Mohammad Totah, and former Minister Khaled Abu Arafa, all of the Hamas Change and Reform Bloc, were kidnapped by Israel in 2006, and were imprisoned for nearly 3.5 years.

Dozens of West Bank legislators, including PLC head, Dr. Aziz Dweik, were also kidnapped as Israel was trying to topple the elected officials after Hamas’ sweeping victory in the 2006 Legislative Elections.

Shortly after the release of Jerusalem legislators, Israel handed them deportation orders to expel them out of their city, Jerusalem, and gave them 30 days to comply. They started their protest at the tent since then.

Legislator Mohammad Abu Teir was expelled from Jerusalem to Ramallah shortly after he was released from prison.

Palestinian Presidency Spokesperson, Nabil Abu Rodeina, slammed the kidnapping of Attoun, and stated that this violation is part of the Israeli policy that aims at removing the indigenous Arab population from Jerusalem in order to replace them with Israeli settlers.

Abu Rodeina demanded the International Community to intervene and stop the Israeli violations.

The Maan News Agency reported that on August 18, a number of Palestinian officials in Jerusalem revealed that Israel is planning to expel 384 political figures and activists from the city as part of its campaign against Palestinian political activities in the occupied City..