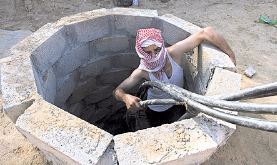 After Egyptian forces flooded a smuggling tunnel with wastewater on Sunday in an attack aimed at stopping Palestinian smuggling, two men were missing and one badly injured. Two days later, all three Palestinian men have been confirmed dead.
The victims were identified as Fadi Mustafa Ash-Shaer, 20, Firas Ahmad, 18, and Anwar Abu Aradeh, 25, all residents of al-Salam neighborhood in Rafah.

Egyptian security forces used, on Sunday, wastewater to flood a siege-busting tunnel along the border with Gaza with waste-water; two Palestinians went missing and one was injured.

Medical sources reported that the wounded resident was moved to a local hospital. Rescue teams are trying to locate the two missing residents.

On Saturday, two Palestinian youths were killed due to a gas leak explosion at a tunnel in Rafah, in the southern part of the Gaza Strip.

Medical sources reported that medics and rescue teams managed to locate seven persons who went missing in the tunnel; three of them were wounded while two of the three died of their wounds later on.