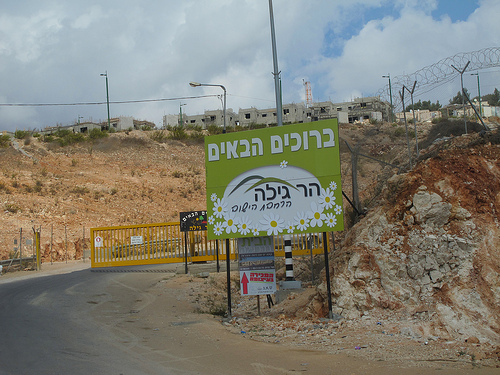 A group of right-wing Israeli legislators submitted a letter to the Israeli Prime Minister on Monday stating that in response to the Palestinian Authority’s unilateral bid for statehood at the United Nations, Israel must retaliate by fully annexing all West Bank settlements as part of the state of Israel. The call comes just as the Israeli Jerusalem municipality prepares to approve 1,100 new settlement units on Palestinian land in the settlement of Gilo, near Bethlehem.The plan to move ahead with new settlement construction in Gilo received preliminary approval by the Israeli Jerusalem municipality, and was submitted to the Jewish National Fund, which owns 90% of the land in Israel, for a 60-day public comment period, after which it is expected to receive final approval, and new construction will begin.

In the midst of protests over high housing prices in Israel, Israeli authorities have sought to construct new units in illegal West Bank settlements and encourage young people to move there — in violation of international law and past signed agreements.

Indeed, Interior Minister Eli Yishai issued a directive that 20% of the new units constructed in Israeli settlements should be set aside for young couples.

The right-wing Israeli legislators who submitted a letter to the Prime Minister on Monday made a far-reaching recommendation that the Israeli government officially annex over half of the West Bank, which was occupied by Israeli forces in 1967 but remains Palestinian Territory. This annexation would leave Palestinians with just 13% of their original land, split into discontiguous islands, or reservations, much like the Native American reservations where people were forced to live after European colonizers took over their land.

In their letter, the legislators wrote, ‘The international damage that Israel could suffer in the wake of the UN vote is significantly smaller than that it would suffer if it doesn’t follow up on the principle you set a decade ago – ‘If they give, they’ll get; if they don’t give, they get nothing.’ This last part was a reference to the Palestinian Authority and the Camp David Accords of 2000, during which the Israeli negotiators attempted to force the Palestinians to give up their internationally-recognized rights, including the right to freedom of movement, the right of return for refugees, and the right to live in a defensible state with clearly-defined borders.

The Israeli legislators, mainly from the right-wing Kadima party, called on Israeli Prime Minister Binyamin Netanyahu to also cut off the aid money to Palestinians, which comes from international donors, but has to pass through Israeli hands for taxation, to accelerate the construction of new settlements in the West Bank and East Jerusalem, to prevent all Palestinian construction in the West Bank, and to cancel the ‘VIP’ cards of Palestinian officials which allows them easier access through the over 500 internal checkpoints run by the Israeli army in every part of the West Bank.