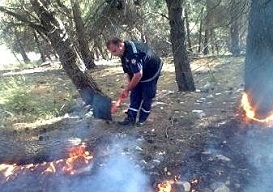 A group of armed extremist Israeli settlers of the Ramat Shlomo illegal settlement installed on lands that belong to residents of Shuâ€™fat, north of Jerusalem, set ablaze dozens of olive trees that belong to two Palestinian families, the Palestine News Network reported.Local sources reported that the setters torched a Dunam (0.24 Acre) of land that belong to the families of Abu Khdeir and Dar Issa.

The sources added that the settlers also torched wheat and fodder, and that despite calling the Israeli police directly after the attack, it took policemen three hours to arrive at the scene.

The residents also stated that, later on Thursday at night, a group of settlers stole ten sheep in the same area, but the residents chased them and took the sheep back.

The attack is the latest of a serious and dangerous escalation by the settlers in Palestine.

On Thursday morning, a group of extremist Israeli settlers uprooted at least 200 olive trees that belong to residents of Qasra village, south of the northern West Bank city of Nablus.

Last Sunday night, extremists burnt a mosque at the entrance of Toba Zanghriyya village in the Galilee, and wrote â€œPrice Tagâ€ and â€œRevengeâ€ on its walls.

On September 5th, a group of extremist Israeli settlers broke into a mosque in Qasra village, near the northern West Bank city of Nablus, and torched it after destroying its property and writing anti-Arab slogans on its walls.

Earlier in June this year, settlers of the Alei Ayin illegal outpost torched a mosque in Al-Mughayyir village, near the central West Bank city of Ramallah, after burning tires and throwing them in the mosque.

Last year, the settlers burnt several copies of the holy Quran while desecrating two mosques near Bethlehem and Nablus.