Erekat: ‘Israel is responsible for The Collapse Of The Peace Talks’ 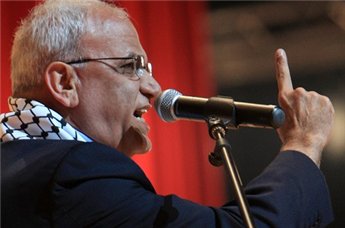 Dr. Saeb Erekat, member of the Central Committee of the Fatah Movement and Palestinian negotiation chief, held a meeting with the former Portuguese President, Jorge Sambaio, currently appointed the High Representative for the Alliance of Civilizations, the Palestinian News Agency, Maan, reported earlier on Thursday.Dr. Erekat assured that the Israeli government is refusing the two-state solution based on the 1967 borders by its ongoing settlement construction activities, and claims that they should be held responsible for the collapse of the Middle East peace process.

He also confirmed that the international Quartet must be held responsible for blocking the negotiation process, declaring that “The Israeli government is a body for constructing settlements, not negotiations.”

He further pointed out that the recent Israeli decision regarding the building of new settlement units, should be considered a final Israeli response to the international Quartet, which called for re-starting the stalled Palestinian-Israeli peace talks.

Dr. Erekat provided the Portuguese President with documents and manuscripts of Israeli settlement activities in Jerusalem, of Palestinian detainees and refugees, and the Israeli blockade on the Gaza Strip.