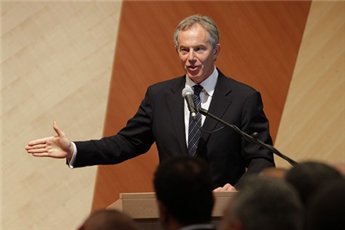 Quartet Committee envoy, Tony Blair, stated Thursday, October 17, that international mediators intend to ask the Palestinian and Israeli delegates to share their perceptions regarding security and border arrangements, under a final status peace agreement, the Maan News Agency reported.He stated that the envoys of the Quartet, which includes the US, the European Union, Russia, and the UN, will be holding separate meetings with the Palestinians and the Israelis next week in Jerusalem, in an effort to revive the peace process.

However, in the process of arranging these meetings, the Quartet seemed to have failed in its goal that was set out in its September 23rd statement, in which it intended to bring both sides together in a “preliminary meeting” in order to work on reviving the stalled negotiations.

Blair also stated that the statement called on both sides of the conflict to present detailed suggestions on the issue of security and borders within three months.

In an interview with Reuters, Blair said that “If we [Quartet] could convince both sides to agree on doing that [giving detailed suggestions on the issue of the security and borders], then we will be able to come out with a conclusion about the attitude of each side about two of the central issues of peace talks”.

“If, within three months, we are able to reach a point where know the clear stances of both sides regarding borders and security, we will be able to tackle the main points of dispute.’ He added, ‘This, in my opinion, would be a great advancement for the talks’.

‘However, I need to stress on the main point here, the best way to resolve the settlements issue is to reach an agreement and resolve the borders issues,’ Blair concluded.

The Palestinian Authority had to quit peace talks with Israel due to its ongoing invasions and attacks into the occupied territories.

But the main reason that pushed the Palestinians to quit the talks, are the illegal Israeli settlement construction and expansions, especially in an around occupied East Jerusalem, the desired capital of the future Palestinian State.