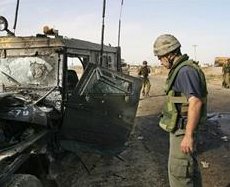 Israeli sources reported on Wednesday evening that an Israeli military vehicle was hit by a roadside bomb, near the Efrat settlement, south of Bethlehem. Damage was reported, no injuries.The army combed the area in an attempt to locate the residents who planted the bomb; no arrests were made.

Explosive experts arrived at the scene to determine the nature of the bomb and to search for other bombs.

Soldiers fired rounds of live ammunition and flares while searching the area.

In related news, Israeli sources reported that a Grad missile was fired, on Wednesday evening, from the Gaza Strip into Ashdod; a number of Israeli suffered panic attacks.

The sources stated that the missile landed and detonated in an open area.