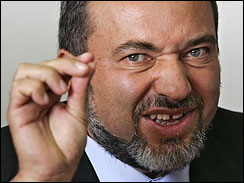 Faisal Abu Shahala, a member of the Revolutionary Council of Fatah, issued an appeal on Wednesday to the international community to end what he termed Israeli terrorism. He described recent Israeli threats to assassinate the Palestinian President, Mahmoud Abbas, as very serious, adding that such threats are a form of terrorism against the Palestinian people, the Palestinian news agency, Ma’an, reported on Wednesday.Abu Shahala asserted that the statements of Israeli Foreign Minister Avigdor Lieberman (of the Yisrael Beiteinu far-right fundamentalist party) are not a ‘tongue slip’ as claimed by other officials, but are indicative of the current Israeli administration’s policies and practices, reflecting Israeli thinking based on terrorism and assassinations.

Abu Shahala pointed out that past Israeli threats to assassinate Palestinian leaders were in fact implemented, and the late Palestinian president, Yasser ‘Arafat was one of them [although Arafat died in France of illness, many Palestinians believe that he was in fact poisoned, although this has never been proven]. He warned the Palestinian leadership to beware of this danger.

He added that the threats to get rid of Abu Mazen were expected, especially after Abbas’ speech in front of the General assembly of the United Nation and his insistence on pushing for Palestinian statehood in spite of Israeli and US threats.

Abu Shahala also criticized the silence of the international community towards Lieberman’s threats, and called on all the world’s countries to punish Israel as it continues what Abu Shahala calls ongoing violations and terrorism against the Palestinians and their leaders.