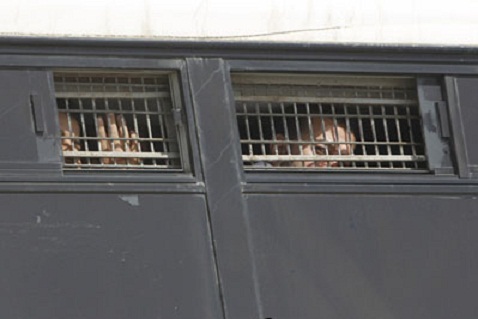 Israeli soldiers attacked on Thursday several detainees held in the Nafha detention camp, in the Negev Desert. In a letter sent to Husam Society, the detainees said that they have been without electricity since more than three days.In their latter, the detainees voiced an appeal to human rights groups and the Red Cross to intervene and stop the violation against them. The Husam Society is a society that advocates the rights of the Detainees and Ex-detainees.

The Maan News Agency reported that the Prison Administration in Nafha confiscated some TV sets from the prison and is keeping the detainees without electricity since several days.

Talking to Maan, a representative of Husam Society stated that what the Prison Administration is doing aims at increasing tension ahead of the implementation of the second phase of the prisoner-swap deal.

In related news, Abdul-Nasser Farawna, a former detainee and a Palestinian researcher specialized in detainees’ affairs, stated that there are approximately 5000 Palestinian male detainees held by Israel, 11 female detainees, and dozens of Arab detainees especially from Jordan, Syria and Egypt.

Farawna added that 195 of the detainees are children, while 225 detainees are held under administrative detention orders without any charges filed against them.

Recent reports revealed that there are more than 1000 detainees who are ill and need medical attention; some of them have cancer and need specialized care.

Farawna stated that there are 532 detainees who were sentenced to at least one life-term, and 123 detainees who have been behind bars since before the Oslo peace agreement was signed between Israel and the Palestinian Liberation Organization in 1993.