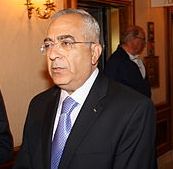 Palestinian Prime Minister, Dr. Salaam Fayyad, stated Saturday that the statements of U.S. Republican Presidential Candidate, Newt Gingrich, are cheap and disgraceful. The statements of Fayyad came after Gingrich stated on Friday that the Palestinians “are an invented people”.Gingrich also stated that U.S. President, Barack Obama, “favors the terrorists in the region”.

The presidential hopeful further stated that should he win the elections, his policies will be close those of Israeli Prime Minister, Benjamin Netanyahu.

Responding to the statements of Gingrich, Dr. Fayyad stated that “the Palestinian people inhabited the land since the dawn of history, and intend to remain in it until the end times”, and added that ‘people like Gingrich must consult history as it seems that all what he knows about the region is the history of the Ottoman era’.

“This fact by itself is a denial for historic facts”, Fayyad added, “Despite oppression,
occupation, and assaults, the Palestinian people remain steadfast in their historic land, and will achieve their legitimate rights”.

The Palestinian Prime Minister also stated that such statements coming from a U.S. Presidential candidate were not even made by Israel’s most fanatic and extremist leaders.

Several Palestinian officials stated that Gingrich’s statements are an adaptation of a “Nazi ideology” that once riddled humanity, and added that Gingrich “lost all touch with reality and his statements only indicate ignorance and racism”, the Maan News Agency reported.

On his part, Taiseer Khaled, member of the Executive Committee of the Palestinian Liberation Organization (PLO) stated the Gingrich’s statements bring to mind statements made by Zionist leaders, and extremist Israeli leaders who deny the existence of the Palestinian people, and their legitimate rights to statehood, independence, and the refugees’ right to return to the homeland they were forcibly removed from when Israel was established in Palestine.