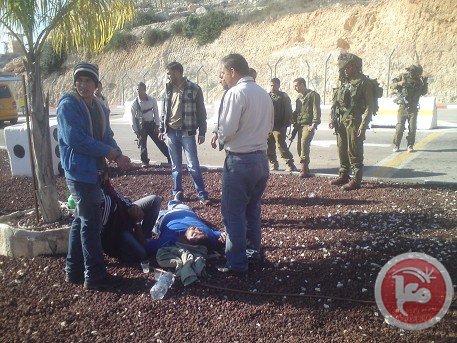 Israeli troops beat a Palestinian taxi driver with their fists, feet and rifle butts, fracturing his back, on Saturday afternoon at the Barta checkpoint, near Jenin in the northern West Bank, according to eyewitnesses.Haitham Ibrahim Kabha, 37, was driving his taxi to Jenin when he was stopped at the Israeli checkpoint, one of over 400 Israeli checkpoints and roadblocks remaining in the West Bank.

Kabha told reporters from his hospital bed in al-Razi hospital that after getting out of his cab, one of the soldiers accused him of insulting the soldiers. He asked for an officer to intervene in the situation. Kabha said, ‘When the officer came, he accused me of insulting a soldier. He asked me to step out of the car and with 8 other soldiers they beat me with their feet, hands and the back of their guns. After that I didn’t feel a thing until I woke up in the hospital.”

The Palestinian news agency Wafa reports that Kabha suffered a fracture in his back, and severe injuries on his head and neck. According to one eyewitness, soldiers continued to beat Kabha as he was screaming in pain, until he was rendered unconscious.

An Israeli ambulance at the checkpoint did not stop to provide assistance to the injured man. Kabha’s brother told reporters with the Palestinian news agency Ma’an, “Israeli soldiers prevented any Palestinian ambulance from helping Haitham when he lost consciousness; they kept back the ambulance for half an hour until they were pressured by protests at the crossing.”

The Israeli military did not issue any comment or statement on the incident.