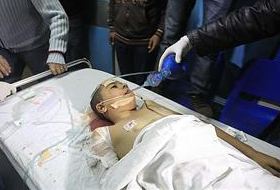 Adham Abu Salmiyya, spokesperson of the Higher Committee for Medical and Emergency Services In Gaza, reported that, in 2011, Israeli soldiers killed 19 children, and injured more than 200, in Air strikes and bombardment targeting the Gaza Strip since the beginning of this year.Abu Salmiyya added that the youngest of the slain children were identified as Malak Shaath, 2, and Islam Qreiqe’, 3, adding that most of the slain children faced horrific deaths as Israeli military shells mutilated their bodies.

He further stated that more than one-third of the wounded Palestinians in 2011 are children, adding that Yousef Bahjat Az-Za’lan, 10, is still in the intensive care unit after a shell fired by the Israeli army on Thursday killed his father, Bahjat, 42, and his brother Ramadan, 12 years old; at least 17 residents were wounded in the shelling, seven of them were children.

Abu Salmiyya accused the Israeli Army of deliberately targeting the civilians during the illegal and random bombardment of civilian areas in the Gaza Strip, especially during late night hours and at dawn.

He added that the repeated offensives against the Gaza Strip are impacting the psychological conditions of the children in Gaza, and called on different international humanitarian groups to ensure the protection of the Palestinian children and civilians in the coastal region in particular, and in Palestine in general.