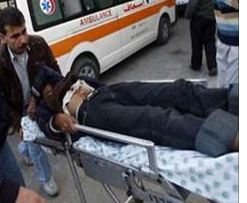 Palestinian medical sources in the Gaza Strip reported, Tuesday, that two Palestinians, including one child, were injured after the Israeli army invaded an area east of the al-Boreij refugee camp, in the central Gaza Strip.The Higher Committee of Medical and Emergency Services In Gaza reported that a 48 year-old man, and a 14 year-old child, suffered moderate injuries and were moved to the al-Aqsa Hospital in Dir al-Balah.

Furthermore, soldiers invaded an area east of Gaza city and opened fire at random; damage was reported, but no injuries.