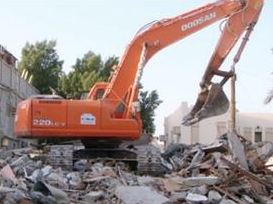 Israeli troops invaded, on Tuesday morning, the al-Makhrour area, in Beit Jala city, north of Bethlehem, and demolished four Palestinian homes.An official at the Beit Jala City Council reported that the four demolished homes were old, but recently had been renovated.

The residents received no orders or notification from the so-called Civil Administration prior to demolition. Israel has been preventing the residents from entering their own lands in the area, since the homes in question are located near the tunnel that Israel built to link between Jerusalem and Kfar Eztion settlement bloc.