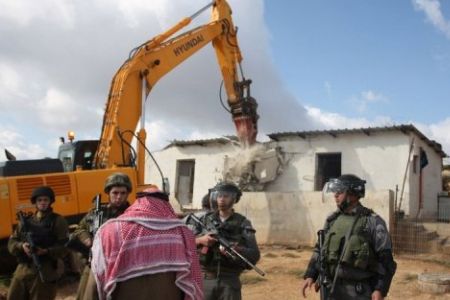 Amnesty International, along with 19 other human rights organizations, reported that the rate of Palestinian homes demolished by Israel 2011 is double the rate of 2010, with over 1,000 Palestinians being displaced this year. Amnesty warned that there is a serious escalation in the construction and expansion of settlements, in addition to a similar increase in attacks carried out by Jewish settlers against the Palestinians, their lands and their property.

The groups urged the International Quartet Committee to increase its pressure on Tel Aviv in order to halt its settlement activities and the destruction of Palestinian homes, describing the Israeli policies as a violation of International Law.

(Quartet members are the United Nations, the United States, the European Union and Russia).

Middle East Director of Human Rights Watch, Leah Whitson, stated that the Quartet Committee must properly address the Israeli settlement activities and the demolition of homes as “violations of International Law that must be halted.”

The group reported that UN figures indicate that the number of Palestinian homes, wells and structures demolished by Israel in 2011 stands at around 500, an issue that led to the displacement of more than 1,000 Palestinians.

Amnesty further stated that over the past twelve month Israel has approved the construction of 4,000 units for Jewish settlers in occupied East Jerusalem.

Israel also approved the construction of forty units and a farm in all illegal settlement near the West Bank city of Bethlehem.

United Nations Secretary-General, Ban Ki-moon, said that he is extremely concerned over the recent Israeli approval of hundreds of units.

Last year, a 10-month settlement freeze expired, and Israel started its settlement activities on a massive scale, the Palestinian Authority had to quit direct peace talks with Tel Aviv due to its ongoing assaults, home demolitions and settlement activities, especially in and around occupied East Jerusalem.