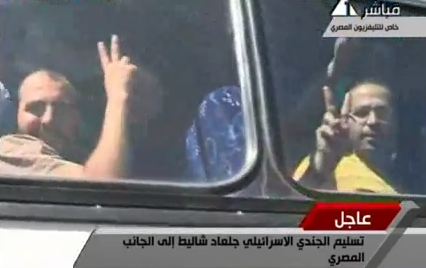 The second phase of the prisoner-swap deal will commence on Wednesday and is planned to be concluded by this coming Sunday. The first phase was implement on October 18 when the former captured soldier, Gilad Shalit, in return for the release of 477 Palestinian detainees, named by the resistance were let go.Israel will be releasing 550 detainees, named by Tel Aviv, and published on Wednesday evening a list that contains the names of the detainees for appeal purposes.

The measure is a formal issue, but as the case with the first phase of the swap-deal and previous swap-deals, with the resistance in Lebanon, the decision to release the detainees is made by Israel’s cabinet that approved the deal.

A senior Israeli official told Israel’s daily, Haaretz, that the second phase will be implemented on Sunday afternoon, after Israel responds to all appeals that may exist, adding that the detainees will be sent to the West Bank and the Gaza Strip.

Furthermore, the Palestinian Prisoners Society (PPS) reported that the Israeli Prison Administration had already informed the detainees who will be released that they will be let go soon.

Haaretz said that the detainees to be released in phase 2, was chosen by the Israeli government, in consultation with Egypt, and, similar to phase one, it only includes detainees who were imprisoned for security reasons, and not for criminal charges.

Unlike the first phase of the deal, the second phase does not include the release of detainees who were imprisoned by Israel after being charged with killing Israels.

Egypt mediated and supervised the talks for several years until a deal was brokered last October.

It is worth mentioning that on October 2009, Israel release 20 female detainees in exchange for a video recording of Shalit proving that he is alive and well.

The total agreed number of detainees to be released under the deal is 1,027. Israel is refusing to release Fatah strongman, Marwan Barghouthi, and PFLP Secretary-General, Ahmad Saadat, in addition to dozens of political leaders and members of the resistance.

The deal includes the release of 180 detainees held by Israel prior to the signing of the Oslo peace agreement, and some detainees who suffer serious health conditions.