Fayyad Asserts That UNESCO Membership Was An Important Step 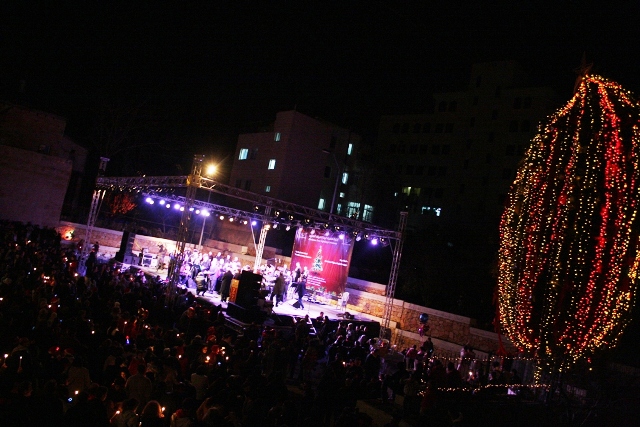 During his participation in an official ceremony to light the Christmas tree in the central West Bank city of Ramallah, Palestinian Prime Minister, Dr. Salaam Fayyad, stated that raising the Palestinian flag at the UNESCO headquarters is an important step. He claimed that this will be followed by other similar steps, until the Palestinian flag is raised on all mosques and churches in Jerusalem, and in countries around the world.Dr. Fayyad sent his Christmas wishes to all Christians around the world, and stated that Christmas is not only an important Christian feast, but a feast to all Palestinians, Muslims, and Samaritans.

He also said that while celebrating the birth of the prophet of peace, the Palestinian people renew their hopes and trust in Palestine and “the Palestine of Jesus Christ, his humanity, his passion, and his teachings, that inspired the entire world.”

On her part, the governor of Ramallah, Dr. Laila Ghannam, saluted the Palestinian people for the achievement made at the UNESCO, adding that “the blood of the martyrs and the pain of the wounded and the detainees will never be wasted.”

Ramallah City Council head, Jeannette Michael, stated that the star of Jesus lit the world, starting from Bethlehem, but Palestine is still living under occupation, and its people are still suffering.

Michael added that the people of Palestine are still denied their basic rights to the freedom of movement and their right to reach the holy sites in occupied Jerusalem.

“This Christmas as we light our candles that carry the message of love and peace Jesus brought to the world, we pray and renew the hope as we mark the birth of Jesus,” Michael said.

At the end of the ceremony, Fayyad , Ghannam, Michael, and Secretary-General Yasser Abed-Rabbo of the Palestinian Liberation Organization (PLO), in addition to several Palestinian priests, lit the tree while the crowds clapped and the children expressed their joy.

Also, the Shepherd’s Group for Christian Carols, and a Norwegian group played some musical symphonies.