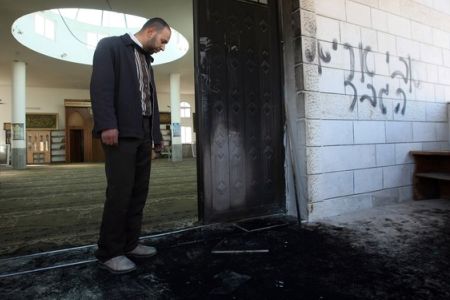 Late on Tuesday night, a group of Israeli settlers attempted to burn down the now disused mosque of Akasha Bin Mohsin. They were unable to obtain entry, and so proceeded to torch the exterior, and spray-painted graffiti including ‘Mohammed is a pig’ on the blackened walls. The mosque, which was excavated in 2003, is located in West Jerusalem off Jaffa Street, and marks the burial site of Muslim disciple Akasha Bin Mohsin (a tenth century follower of the Muslim Prophet Muhammad). He is believed by Muslims to have been killed in battle, and washed by angels between earth and heaven. The building still hosts a minaret, but is currently being used for storage by the city council.

Israeli police cordoned of the Mosque and the street leading up to it, and Israeli authorities said that an investigation of the incident would be carried out. As of yet no suspects have been apprehended or questioned, and there are no official leads.

In addition to the graffiti reading ‘Mohammed is a pig’, the arsonists wrote graffiti that said “Mohammed is dead” and “Pricetag” in Hebrew. ‘Pricetag’ is a reference to a campaign by Israeli settler youth to ‘force the Palestinians to pay for evacuations of Israeli settlements in the West Bank by the Israeli authorities.

The attack on the mosque is the latest in a series of incidents this week by Israeli settlers which has been marked increase in Israeli settler attacks on Palestinian Muslim and Christian holy sites, including the takeover of buildings on the site where Jesus is believed by Christians to have been baptized by John the Baptist.

Several mosques have been burned by Israeli settlers over the last few months, including an arson attack in Tuba-Zangaria, which completely destroyed the town mosque, and also included graffiti saying ‘price tag’ in Hebrew.

Before this latest incident, the most recent attack against a mosque attack was carried out last week, and targeted a mosque in the western part of Al-Quds (Jerusalem). The settlers burnt parts of the mosque and wrote anti-Arab graffiti on the walls.

Although Israeli police arrested several Israeli settler youth in relation to that arson, no charges were filed and all were subsequently released. Israeli media have reported that the settlers engaging in the price tag campaign no longer fear repercussions from the Israeli police for their attacks on Palestinian mosques and other holy sites.

The ‘price tag’ slogan has also been spray-painted recently on the offices of Israeli group Peace Now, and its members have also received numerous death threats over the phone and via text messages.