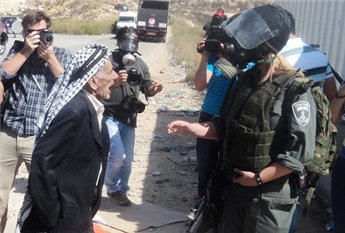 The Al-Quds Satellite News Network correspondent, Linda Shalash, was injured during the clashes after the Israeli soldier fired a stun grenade directly towards her. She was transferred to the hospital.

A plenty of families of Palestinian prisoners, freed in the second Shalit-swap deal, gathered on Sunday afternoon at the gate of the Ofer Military Prison, but the Israeli soldiers asked them through loudspeakers to evacuate the area. The soldiers, then, fired tear gas bombs and rubber bullets. They, moreover, used the new technology of weapon called “The Yelp” against gathered Palestinians.

It is worth mentioning that the Hamas Movement and Israel have struck a prisoner swap deal includes the release of the Israeli soldier, Gilad Shalit,in exchange of some 1167 Palestinian prisoners, more than 500 of whom are sentenced long-term life sentences.

The deal is divided into two parts in which Hamas released the Israeli soldier and Israel released about 500 Palestinian long-term sentence prisoners two months ago.

The second part of the agreement did not include any of Hamas affiliates’ prisoners, and most of the freed prisoners have few days or months left to end their terms at jail and some have already finished their terms.