One Dead, Five Injured in Israeli Shelling in the Gaza Strip 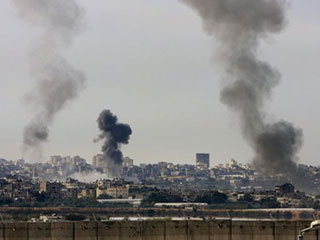 One Palestinian was killed and five were injured in an Israeli shelling of the Gaza Strip on Friday morning, a Palestinian medical source reported.The source identified the dead as Mo’min Abu Daff, who at appears was killed in an artillery shelling that targeted Juhr Eddik neighbourhood, east of Gaza city.

The other wounded five are farmers who were working in their land when the Israeli artillery hit the area. They were moved to Al-Shiffa hospital for treatment, and one of the wounded is said to be in critical condition.

The Ma’an News Agency reported that the dead is a member of an Islamic Salafist group, known as Jund Ansar Assuna.

In a separate incident Friday, local eyewitnesses report that Israeli tanks shelled an area known as al-Zaitoun, east of Gaza City. No injuries were reported.

Israel has escalated attacks against the Gaza Strip in the past few months, targeting several areas of the coastal region.