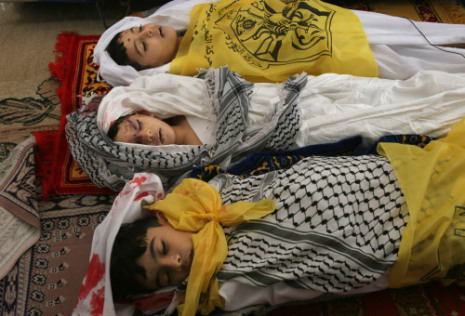 On the night of December 29, 2009, just after Israel launched its deadly, illegal, war on the residents of the Gaza Strip, Israeli war-jets fired missiles at Imad Aqel Mosque in the Jabalia refugee camp, in northern Gaza, also hitting a home wounding the father, and the mother, and killing five of their children.Anwar Ba’lousha, and his wife Samira, were wounded, while their daughters; Tahrir, 15, Samar, 13, Dina, 8, and Jawaher 4, were all killed in the deadly blast.

The father said that he and his wife have a new daughter now, named Tahrir after her slain sister, adding that the family is living in overwhelming pain, remembering the slain children, and their once delightful presence.

“They are all dead, but I can still feel their presence around us”, the father said while looking at a family picture on the wall, “This place feels empty, but our hearts are filled with love, and sorrow for their death”.

While his face shows no signs of sadness, trying to maintain an image of a steadfast father, the father said; “My wife is unable to overcome the pain, the loss, just yesterday an UNRWA team was removing the rubble of our neighbor’s home that was shelled and bombarded during the war, and my wife could not help but cry remembering what happened to us, and the family we once had”.

Anwar added that he spends a lot of time near the graves of his daughters, talking to then, and remembering the family he once had, and still loves.

His surviving family members are still suffering the pain, posttraumatic symptoms and nightmares.

A surviving daughter, Eman, 20, had a very strong connection with her sister, Dina, who died in her arms.

“She always seems in distance space, thinking, remembering and unable to clear her mind”, the father stated, “Sometimes I call her name, I try to talk to her, but she won’t be able to hear me”.

He also stated that he now fears that his son, Mohammad, who recently had surgery to remove shell fragmentation from his leg, is overwhelmed with the thoughts of revenge for the death of his sisters.

For three years now, the bereaved family has been moving from one house to the other, but every time they move to a new place, the surviving children find themselves unable to make friends, and feeling more isolated.

“We recently searched for our son, Mohammad, for several hours, and when we found him he said he was looking for friends”, the father stated, “He would walk to areas we lived in, to the UNRWA school, and other areas”.

The family was recently able to return to its home that was once filled with children and happened, and was just rebuilt after years of being destroyed by the deadly Israel missile that practically killed an entire family when an Israeli soldier decided that their home is “an enemy target” and went ahead to bombard it.

Anwar still seems having mixed feelings and fears, he thinks of the future, and also thinks about the court case he lodged in Israeli courts seeking financial compensation, to feed what’s left of his once large, loving family.

“The money of the whole world will never be able to compensate me, I want my daughters back, not money”, he concluded, “But I also want to provide food and shelter for my surviving children, every time Israel bombards Gaza, I become sacred, ‘am always afraid the army will kill the surviving members of my family.

During the offensive on Gaza, 1419 Palestinians were killed; thousands were wounded, while dozens died of their wounds later on. Thousands were injured, as the army used the illegal White Phosphorous shells, heavy bombs, and pounded every corner of the coastal region from the air, land and sea.

Now, as 2011 is ending, the internationally promised reconstruction of the Gaza Strip remains on paper, and in a cyberspace of vows. Despite claims of easing the deadly siege on Gaza, the coastal region is still surrounded, and essential medical supplies are still missing leading to the death of dozens of patients while other patients could face the same fate due to the lack of medical equipment and supplies.