Activists campaign against sale of Israeli drones to France 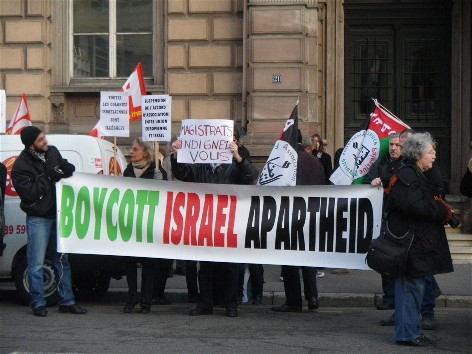 A group of activists involved in the Boycott, Divestment and Sanctions Campaign in France have launched a campaign calling on the French government to call off a deal to purchase five hundred million dollars worth of Heron TP Predator drones manufactured by the Israeli company IAI.The campaign in France follows a similar action by activists in Finland that was successful in stopping the Finnish government from purchasing military drones from an Israeli company. The Finnish President later came out with a statement condemning what he called ‘Israeli apartheid’, which is a term used by the activists in the Boycott, Divestment and Sanctions movement to refer to Israel’s discriminatory practices and policies toward the indigenous Palestinian population.

In addition to the Boycott campaign, which has so far involved petitions, letters to Parliament and protests, a number of French legislators have called for the deal to be called off simply because they believe the Heron TP drones are not suited to the needs of the French military.

The petition by the activist group states, “No to the purchase by France of 318 million euros worth of Israeli drones! An immediate military embargo against Israel!” It also accuses the Israeli government of violating international law, stating, “Israel has a well established record of violations of international law and human rights, on display in its various military operations and aggressive attacks, incursions and occupations of Palestinian territories and other Arab countries, in its abusive and indiscriminate use of force and in the deliberate targeting of civilians and infrastructure. All of which result in a ceaseless repetition of war crimes and crimes against humanity.”

The French Boycott, Divestment and Sanctions Campaign compares Israeli policy to the government of South Africa under apartheid, in which black South Africans were discriminated against by a set of laws and policies imposed by the white government.

The international campaign of Boycott, Divestment and Sanctions aims to target Israeli companies and companies that do business in Israel in order to use economic pressure to push the Israeli government to adhere to its obligations under international law and signed agreements with the Palestinian people.