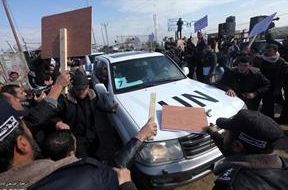 The Hamas movement slammed the U.N. Secretary-General, Ban Ki-Moon, for refusing to meet with families of Palestinian political prisoners held by Israel, and stated that his refusal is an indication that he is siding with the occupation.In a press release, Hamas stated that by refusing to meet families of victims killed in Israeli offensives, and families of detainees held by Israel, “Ki-Moon is violating the same principles and regulations the UN is based on.’

The movement called on all factions to declare their rejection to the stances of the U.N. Secretary-General, and called on the United Nations to support the Palestinian people living under illegal Israeli siege, occupation, and ongoing attacks carried out by the Israeli army and the armed Israeli settlers in the West Bank.

It is worth mentioning that as the convoy of Ban Ki-Moon entered Gaza through the Erez terminal on Thursday. Several protestors threw shoes and stones at the convoy, accusing the U.N. Secretary-General of being biased towards Israel.

Some protesters carried posters reading: “Where is the role of the United Nations while Israel is kidnapping elected legislators”, “Where have you been while they starved us, bombarded our homes and killed out children”, “Stop siding by Israel”, and other slogans.