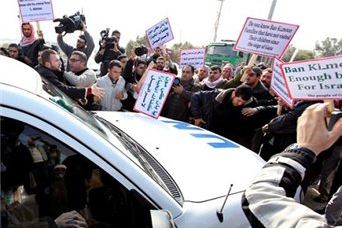 The Executive Committee of the Palestinian Liberation Organization (PLO) issued an apology for United Nations Secretary-General, Ban Ki-Moon, after several protestors in Gaza hurled shoes at his convoy upon entering the Gaza Strip on Thursday.The protesters expressed their anger and frustration after the U.N. head refused to meeting families of Palestinian political prisoners held by Israel, and families of victims of the Israeli war on Gaza.

The PLO Executive Committee added that it appreciates the role of Ban Ki-Moon, and the United Nations in supporting the Palestinian people and their legitimate, internationally-guaranteed rights.

It further stated that the majority of the Palestinian people reject what happened to the convoy of the Ki-moon, as the Palestinian nation is known for its hospitality to its visitors.

The Ma’an News Agency reported that several families of Palestinian detainees held by Israel and Palestinians illegally exiled from the West Bank to Gaza, protested the International official for refusing to hold a meeting with them, while a number of protestors hurled shoes and sticks at his convoy ass it crossed into Gaza via the Beit Hanoun (Erez) terminal.