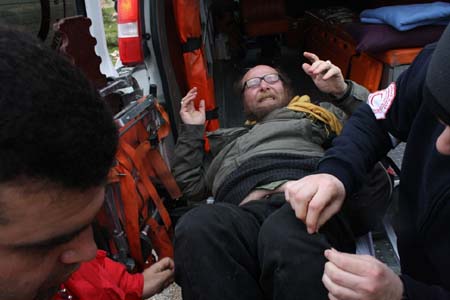 Rasem Ubeidat, a Palestinian writer and journalist from east Jerusalem, headed to ‘al-Maskoubeya’ interrogation center in Jerusalem to appear before the Israeli intelligence service which delivered Ubeidat an order issued by the Shabak Israel Security Agency presevnting him from having access to the West Bank.

In the Gaza Strip, on 31 January 2012, Israeli forces stationed at the border between the Gaza Strip and Israel to the east of Shujaiya neighborhood in the east of Gaza City, opened fire at Munther Rashad Saleh al-Nakhala, 44, wounding him by a bullet to the left foot. He was hunting birds with friends with his near the building of the Energy Authority. He was nearly 500 meters from the border.

On 26 January 2012, Israeli forces stationed at the border between the Gaza Strip and Israel to the east of Khan Yunis in the south of the Gaza Strip opened fire at farms and residential areas in the east of Abasan village, east of Khan Yunis. Palestinian farmers were forced to flee their farms. Israeli forces continued the sporadic firing for approximately one hour. Neither casualties nor damage to property were reported.

On 29 January 2012, Israeli forces positioned at the border between the Gaza Strip and Israel to the east of al-Shujaiya neighborhood in the east of Gaza City fired two artillery shells at Palestinian houses. One of the shells landed on a house belonging to Abdul Ra’ouf Hamed Mardi Hajjaj, 27. The shell opened a hole in the sealing of the kitchen in Hajjaj’s house and caused slight damages to the contents of the house. The other shell landed in a farm belonging to Hamed Mardi Hajjaj, 74.

Also in the Gaza Strip, on 29 January 2012, Israeli forces, backed by military vehicles and apaches, moved into Gaza International Airport, in the far southeast of Rafah, south of the Gaza Strip amid indiscriminate firing. Israeli forces abducted Hajjaj Yousif Ehmeid al-Soufi, 21, who is a university student and Ahmed Hussein Awad Abu Athra, 20, who is a member of the Palestinian National Security Service. Al-Soufi and Abu Athra are from al-Shouka village in the east of Rafah.

Israeli forces also fired two artillery shells and opened fire from apaches at open areas in the north of the Gaza Strip.

On 27 January 2012, Israeli forces distributed a military order to close a dirt road leading to four Palestinian communities in the south of Yatta, in the far south of Hebron. According to data available to PCHR, Israeli forces distributed the said military order to a number of Palestinians in Kherbat Jebna. The order requires the closure of the said dust road which is linked with the settlement road no. 317 and which leads to four Palestinian communities in Kherbat Bir al-Ad, Kherbat Jebna, Kherbat al-Markaz and Kherbat Halawa. Approximately 320 Palestinians who mainly depend on grazing sheep and goats live in these four communities. It should be noted that the population in the four affected communities live in caves and cottages. They were subjected before to forcible transfer by Israeli forces under the pretext that they are present in zones used by the Israeli army for training purposes. In addition, the population in the area was repeatedly subjected to attacks by the Israeli settlers who seek to have control over their lands. The closure of the said road is aimed at transferring the local population from the affected area in order to expand 11 surrounding Israeli outputs.

Also on 27 January 2012, Israeli forces delivered two notices requiring Palestinians to stop construction works in two houses in al-Ma’adsara village, south of Bethlehem, and threatened the owners of these houses under the pretext of lack of construction licenses. The two houses belong to Amjad Khaled Ibrahim Zawahra and Suleiman Mohammed Hussein Zawahra.

On Sunday, 29 January 2012, Israeli forces moved into Hares village, north of Salfit. They headed to five Palestinian houses and delivered 4 Palestinians notices informing them of Israeli forces’s intention to demolish their houses.

On 01 February 2012, Myassar Abdul Majid Ibrahim, 61, from Surra village, southwest of Nablus, sustained wounds when three Israeli settlers, near the crossroads near ‘Yitzhar’ settlement, stoned the car in which she was travelling. Myassar sustained wounds as a result in her forehead and she bled. She was transferred to Rafidia Public Hospital for medical treatment. It was founded out that Myassar sustained laceration in the forehead and suffered from hemorrhage in the brain.

In the West Bank, during the reporting period, Israeli forces used excessive force to disperse peaceful demonstrations organized in protest to Israeli settlement activities and the construction of the annexation wall in the West Bank. As a result, Muhib Mohammed Asaad al-Barghouthi, 46, photographer of al-Hayat al-Jadida Newspaper, sustained wounds by two bullets to the feet. Al- Barghouthi was transferred to Palestine Medical Compound in Ramallah for treatment.

Also Mohammed Ateya al-Tamimi, cameraman of the Popular Committee against the Wall and Settlement in Nabi Saleh village, sustained wounds by a tear gas canister to the right foot. A third Palestinian demonstrator also sustained wounds by a bullet to the right leg. PCHR fieldworker was unable to get the personal information of the third wounded person as he came from another village and he was not transferred to any hospital or medical center for treatment.