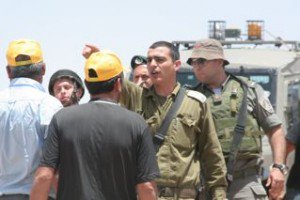 A group of fundamentalist Israeli settlers installed on Friday a new illegal settlement outpost, south of the southern West Bank city of Hebron, while another group of armed settlers invaded areas in Beit Ummar town, north of Hebron.Rateb Jabbour, coordinator of the National Committee Against the Wall and Settlements, reported that approximately 250 settlers, accompanied by Israeli Border Police officers, invaded that Al-Carmel village, and installed six new caravans in Um Ash-Shuqhan area, near the Maoun illegal outpost that was installed on privately-owned Palestinian lands.

In related news, Yousef Abu Maria, media spokesperson of the National Committee Against the Wall and Settlements in Beit Ummar, stated that approximately 150 settlers attacked Palestinian farmlands in Za’ta area, east of Beit Ummar, and blocked the Jerusalem-Hebron road in front of Palestinian traffic.

Abdul-Hadi Hantash, a Palestinian expert of Maps and Settlements that recent escalation is part of a larger plan that aims at installing more outposts, and expanding existing one, by stealing more Palestinian lands.

Hantash added that settlers are stealing Palestinian lands in Um Ash-Shuqhan area, and installing new outposts, so that they can create a geographical contiguity by linking the new outposts with the settlements of Ma’oun, Karmiel, Havat Yair, Avigayil, and Susyia. All are illegal outposts built on privately-owned Palestinian lands.

The official further stated that Israeli is implementing an agenda that aims at isolating the Palestinians in Hebron by the illegal Annexation Wall and the chain of settlements and outposts built on the hills of the Hebron district.

“Israel wants to force the Palestinians out of their homes and lands, wants them to leave”, Hantash added, “But the residents are determined to remain steadfast in their homes, lands”.