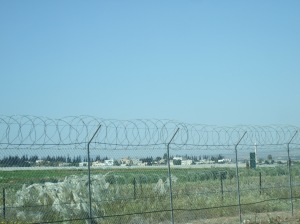 A group of Israeli settlers from the Mehola settlement in the Jordan Valley, in the northeastern part of the West Bank, approached a Palestinian shepherd who was tending his sheep and beat him with sticks and clubs on Friday.Medical sources reported that 20-year old Mahdi Daraghma was admitted to the Jenin hospital with moderate injuries after he was severely beaten by a group of Israeli settlers.

The settlement of Mehola is made up of a residential and an agricultural section, as well as a number of packaging plants in which Israeli settlement companies like Arava and Carmel prepare products for export.

According to a 2011 report by CorporateOccupation, Palestinians from nearby villages are employed in the settlement and exploited: “Workers are paid from 60-80 shekels per day, half the Israeli minimum wage, and have no contracts or health insurance. There have been documented incidents of employers in Mehola falsifying wage slips in order to appear to be paying proper wages.”

Palestinian shepherds like Daraghma are frequently attacked by Israeli settlers while herding sheep through isolated fields near illegal Israeli settlements.

In a recent incident in the same area, a group of Israeli settlers abducted a 60-year old shepherd and stole his sheep.

Israeli settler attacks against Palestinian civilians rose significantly in the last few months of 2011, including a mob attack on Palestinians and international supporters near Anatot in September, and deadly attacks in both November and December.