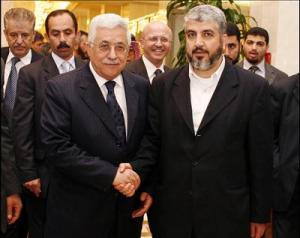 After recent meetings in Qatar, mediated by Sheikh Hamad Bin Khalifa, Palestinian President Mahmoud Abbas and Hamas Chief Khaled Mashaal announced that Abbas should serve as the Prime Minister of the Interim-Government, until elections can take place later this year. The two met in Doha, the Qatari capital, despite recent tensions between the parties, particularly in light of the rejection of a Fatah visit to the Gaza Strip by Hamas last month.During the 2006 elections, Hamas took the majority of seats and votes away from the previously ruling Fatah party, resulting in heightened tensions between the two, and sanctions launched against the Gaza Strip by the international community.

In 2007, Hamas launched what it called a ‘pre-emptive strike’ against Fatah, and ousted them from the Gaza Strip, leading to a tightening of the sanctions and a strengthening of the siege of the coastal enclave. After four years of cold-shoulder treatment, with the West Bank ruled by Fatah, and the Gaza Strip by Hamas, the two parties decided to reconcile last year. Under the auspices of Egyptian mediation, they signed the Reconciliation Agreement in May 2011, calling for a National Unity Government, and new elections.

It is not confirmed that President Abbas will indeed become the interim Prime Minister until elections can take place in the near future, according to Ma’an news, with anonymous sources close to Abbas claiming that the role is not certain. According to a Hamas website, a source close to the talks is quoted as saying that Abbas and Mashaal agreed ‘in principle’ on Sunday that Abbas would head the interim government. Early proclaims stated that the elections were aimed to take place in May, but this is also as of yet unconfirmed.

Hamas previously stated unequivocally that the current Palestinian Authority Prime Minister, Salam Fayyad, was unacceptable as the interim leader. Whilst many the international community, (including Israel, the United States and the European Union) list Hamas as a terrorist organization, having Abbas as the Prime Minister will certainly improve its credibility, and serve to counter-balance the effect of having Hamas in government.