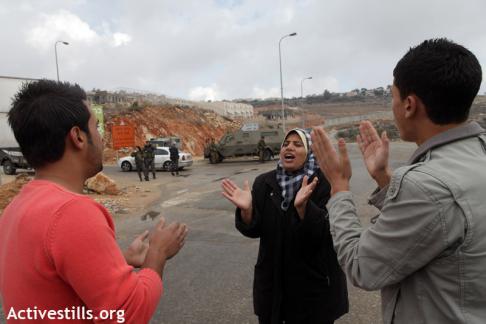 On Sunday, villagers from al-Walaja and international supporters went to the area where Israeli authorities are in the midst of destroying lands to build the Annexation wall. They held a non-violent march and rally, until a group of Israeli soldiers attacked the marchers.The focal point for Sunday’s protest was the oldest olive tree in the Bethlehem District, which is over 3,000 years old, and is scheduled for demolition by the Israeli authorities in order to expand the illegal settlement of Gilo.

Protesters were met by a squadron of Israeli soldiers who attacked them with tear gas and pushed them back out of the area. The troops detained three protesters, including organizer Mazin al-Aza, but released them later that same day.

However, the decision also rejected another proposed change to the Wall’s path, which means that a large area of agricultural land owned by residents of al-Walaja will remain on the ‘Jerusalem’ side of the Wall, accessible only by agricultural gates and a permit system. Construction of the Wall continues although legal procedures are not yet exhausted.

Protests have been held in the village every week for the last several years, organized by local villagers and members of the Popular Committee Against the Wall.