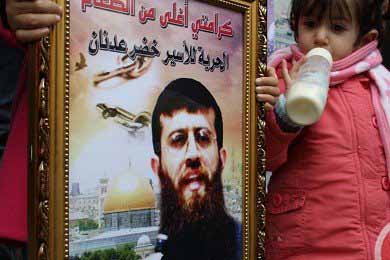 The Israeli Military Court decided to hold a session on Thursday at the Safad Hospital where the hunger-striking ailing detainee Khader Adnan is hospitalized, and facing seriously deteriorating health conditions.Head of the Legal Unit at the Palestinian Prisoner Society (PPS), lawyer Jawad Boulos, stated that the decision was made after deliberations were held to prevent moving the detainee to the Ofer Military Court due to the seriousness of his health condition.

Boulos added that a specialist at the hospital sent a letter to the Ofer Court stating that Adnan is rejecting all medications and examinations, and that his health condition is very serious.

The physician added that moving the detainee from his hospital bed will lead to further complications.

Khader Adnan, from the northern West Bank city of Jenin, started his hunger strike on December 18, one day after he was arrested by the army. He has not faced charges, and decided to strike to protest his illegal imprisonment.

He is one of nearly three hundred Palestinians being held in Israeli detention camps without charges, in what the Israelis call ‘administrative detention’ – the term for these detentions is six months, at which point Israeli officials decide whether to release the prisoner or detain him or her for an additional six months.

These extensions can go on for years – the longest administrative detainee has been held for more than eight years – and are in violation of the Fourth Geneva Convention, which prohibits the indefinite detention of prisoners without charges.