Abbas to Hale: “No Contradiction Between Peace, Palestinian Reconciliation” 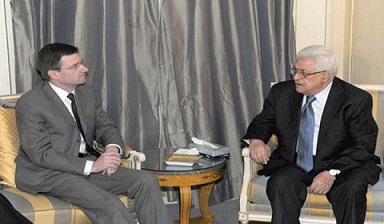 Abbas stated that peace is a strategic choice that the Palestinians are determined to achieve, and that internal unity and reconciliation are national necessities and interests that have nothing to do with the peace talks.

The Palestinian President called on the Israeli government to openly accept the two-state solution based on the boundaries prior to the 1967 Six-Day War, and to stop all of its settlement activities, in addition to the release of all political prisoners, including those imprisoned since before 1993.

He said that these principles are not, in any way, preconditions, but are commitments that Israel must abide by, and that implementing these commitments would enable the resumption of the peace process and the final-status peace talks.

Efforts to resume Palestinian-Israeli peace talks have been facing numerous obstacles due to Israel’s ongoing violations, mainly due to its ongoing illegal settlement activities in the occupied territories, including in East Jerusalem, as well as its ongoing assaults and incursions.