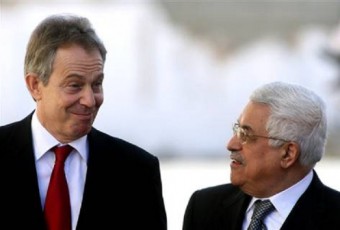 The Palestinian Authority in the West Bank renewed its rejection to resume the “exploratory talks” with Israel, and stated that the “confidence-building measures” proposed by Quartet Envoy, Tony Blair, to Israel, are not enough, the Palestine News Network (PNN) reported.Hussein Ash-Sheikh, member of the Central Committee of Fateh movement of President Mahmoud Abbas, told the Palestine Radio that Blair’s proposals are “ridiculous”, and added that President Abbas told U.S. Envoy, David Hale, on Wednesday evening that these proposals are not enough to entice the Palestinians to restart talks with Israel.

Blair proposed that Israel should allow the Palestinian Authority to open a number of Palestinian Police Stations in areas classified as “B” under the Oslo peace accords, and also granting the P.A. full civil control in these areas.

Areas classified as “B” are under Israel security control, with limited Palestinian administrative control.

Another proposal presented by Blair is for Israel to ease the restrictions on the freedom of movement of the Palestinians in the Jordan Valley area, and to grant more work permits for Palestinians laborers to be able to work inside Israel.

He also called on Israel to grant 2,500 family reunification permits to spouses of Palestinians so that they would be able to live in the occupied territories.

Furthermore, Israel proposed a series of measures including Israel’s approval of Palestinian postage for mail leaving via Jordan, and to allow the export of textiles and furniture from the Gaza Strip, in addition to allowing the transfer of NIS 50 Million to Banks in the Gaza Strip.

Last month, the Palestinian Authority in the West Bank and Israel held exploratory talks in Amman – Jordan, hoping to be able to resume official and direct peace talks that have been idle since September 2010, after Israel’s 9-months freeze on settlement activities ended.

Hussein Ash-Sheikh of Fateh stated that Abbas will start consultations in order to form a transitional government, headed by him and run by independent figures.

The government will run the daily tasks, and will be in charge of preparing for and holding the upcoming general and presidential elections, and will also be responsible for initiating the reconstruction of the Gaza Strip.