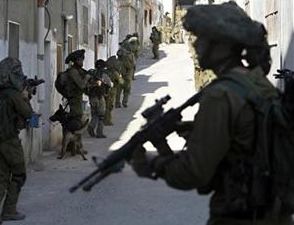 Islamic Resistance Movement, Hamas, issued a press release denouncing the Israeli army’s attacks against homes and officers of elected Palestinian legislators in the occupied West Bank. The movement said that the attacks target the determination and steadfastness of the legislators.On Thursday, Israeli troops broke into the homes of offices of elected legislators, members of Hamas’ Change and Reform Parliamentary bloc, in the northern West Bank city of Jenin.

The army searched the office, and homes, of elected legislators Khaled Suleiman, Khaled Yahia, and Ibrahim Dahbour, and interrogated them while ransacking their property and belongings. The legislators were also interrogated in their own homes.

Dahbour said that the fresh wave of attacks against the elected officials falls under Israel’s ongoing attempts to sabotage Palestinian reconciliation and national unity.

Meanwhile, Hamas warned Israel of the consequences of these violations, and expressed solidarity with the detained democratically-elected officials, and its solidarity with all Palestinian political prisoners held by Israel.

It called on the Palestinian people, and different parliaments around the world, to defend the elected Palestinian officials, and to expose the illegal Israeli violations against them.