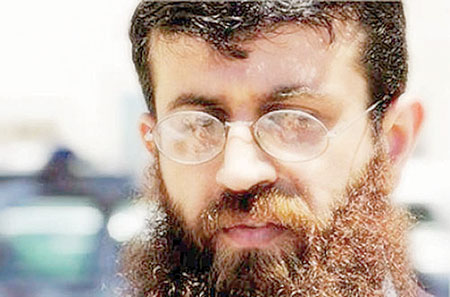 Sahar Francis Lawyer of the Prisoner Support and Human Rights Association, Ad-Dameer, visited on Friday, detainee Khader Adnan who has been on hunger strike since more than 62 days and is currently at an Israeli hospital in Safad, in the Galilee. The visit lasted for two hours, 10 – 12, and Adnan told Francis that he is determined to continue his hunger strike despite his bad and gradually deteriorating health condition, and added that “his battle his battle is not personal, but a Palestinian struggle against the illegal Administrative Detention, that confines hundreds of detainees behind bars without charges, in direct violation of International Law and the Fourth Geneva Conventions”.

Despite the sharp deterioration in his health condition, and the increasing possibilities that he might even become blind or suffer a heart attack, as stated by a report by the Physicians for Human Rights, Adnan is only drinking some water, and IV liquids are provided by the doctors.

Lawyer Francis said that the Israeli Prison Administration agreed, only two days ago, to allow Adnan to bathe, cut his hairs and nails, for the first time since he was kidnapped and taken prisoner in December 2011.

She added that Adnan still enjoys high confidence, and solid determination, despite his bad health condition, and is determined to continue his strike.

The Ad-Dameer Association warned that Adnan is at risk of death, adding that “According to a doctor from Physicians for Human Rights-Israel who was able to visit Khader last night, 14 February, for his fifth medical examination since his arrest, Khader is under a very direct threat of death. All of his muscles, including his heart and his stomach, are under threat of disintegrating and his immune system could cease to function at any moment. Khader’s body is at high risk of sudden heart attack or total organ failure, which would cause imminent death”.