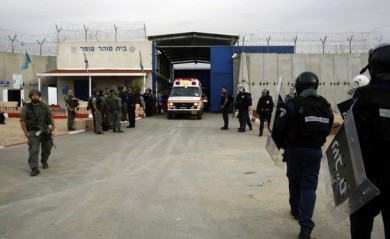 The Palestinian Prisoners Society (PPS) reported Friday that Palestinian political detainees held at the Ramon Israeli prison, are being punished for protesting abuse against their families, who are being ordered to undergo humiliation and strip search before they visit their detained family members.The PPS stated that these punishments include depriving them from their visitation rights for a month, removing all electric equipment they have, and preventing them from buying food from the prison canteen.

It added that families of detainees imprisoned at the Ramon prison told its researchers that only 24 families out of 150 managed to visit their detained sons, and that scuffles erupted when the soldiers tried to force the women to undergo
strip searches as a precondition for visitation.

Amjad An-Najjar, head of the PPS Hebron Branch, stated that Israel is trying to humiliate and degrade the wives, mothers and sisters of the detainees by trying to oblige them to be strip searched, and demanded the Red Cross to intervene and oblige Israel to stop its illegal practices.

He added that the detainees in Ramon prison are demanding Israel to stop its illegal policies of solitary confinement, the high fines imposing on then, to allow them to be able to buy food, and to allow detained brothers to be able to be imprisoned in the fame facility and section.

The detainees are also demanding the army to stop breaking into their rooms and tents, and to allow them to be able to call mobile phones, especially the detainees who are from the Gaza Strip as their families have not been allowed to see them since several years now due to the illegal Israeli siege on Gaza.

They are also protesting the new policy of shackling them during their visitations, even when meeting their lawyers. The policy was imposed after Israeli corporal Gilad Shalit was captured by the resistance in Gaza in June 2006. Shalit was released last year under a prisoner-swap deal mediated by Egypt.