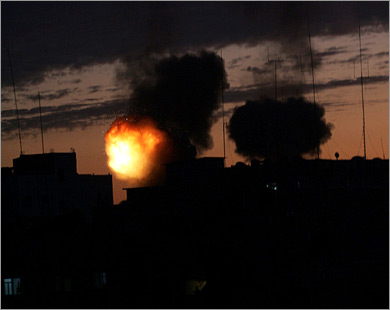 Palestinian medical sources in the Gaza Strip reported that two residents were wounded, on Saturday evening, when the Israeli Air Force bombarded a blacksmith workshop in az-Zeitoun neighborhood, east of Gaza City.Eyewitnesses said that the Air Force fired two missiles into the workshop that belong to Ashour family. The blacksmith workshop is part of the home of the family an issue that led to the injury of two family members; their injuries were described as mild-to-moderate.

Last week, Israeli forces killed a Palestinian elderly man, Abdul-Karim al-Zaytoona, 71 years old, and wounded his son, Mohammed, 22, when an Israeli F16 aircraft fired a missile on 11 February 2012 at an animal farm. The man and his son were in a shed near the targeted farm.