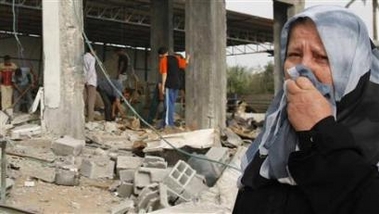 Palestinian medical sources in the Gaza Strip reported, on Sunday at dawn, that a father, mother and their two children, were wounded when the Israeli army bombarded their home in Gaza City. Two Palestinians were wounded in an earlier strike on Gaza. The sources stated that the Israeli Air Force fired at least one missile at the house of Ahmad az-Zaharna, in Gaza’s at-Tuffah neighborhood, wounding the father, Ahmad, in addition to his wife and their two children. They were all moved to the ash-Shifa Hospital in Gaza city.

Furthermore, the army bombarded an area east of Gaza city leading to excessive damage but no injuries.

The area is claimed to be a training center for the al-Qassam brigades, the armed wing of the Hamas movement.

On Saturday at night, Israeli fighter jets fired a number of missiles at a blacksmith workshop in Gaza leading to two injuries among the civilian population.

Eyewitnesses said that the Air Force fired two missiles into the workshop that belong to Ashour family. The workshop is part of the home of the family an issue that led to the injury of two family members; their injuries were described as mild-to-moderate.