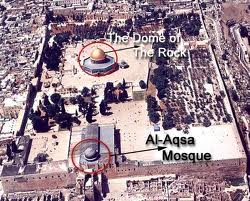 Dozens of Palestinian residents foiled, on Sunday morning, an attempt by dozens of fundamentalist Israeli settlers to break into the Al-Aqsa Mosque in occupied East Jerusalem.Local sources reported that the settlers gathered near the al-Magharba Bridge, that leads to the al-Magharba Gate, west of the al-Aqsa mosque, while dozens of Israeli policemen were deployed in the area.

The police allowed the settlers through and prevented all Palestinians, aged 45 of under, from entering the area while on their way to pray at the al-Aqsa mosque, an issue that led to clashes between the Palestinians, and the Israeli soldiers and settlers. Initial Israeli reports stated that three soldiers were mildly wounded.

It is worth noting that a number of extremist settler groups recently called for attacking the al-Aqsa mosque on Sunday “in order to maintain Jewish sovereignty on the temple”, according to the settlers.

The al-Quds Media Center reported that some extremist settler groups, including extremist members of the “Trustees of the Temple”, called on their followers to break into the al-Aqsa Mosque in order “to affirm the Jewish control and sovereignty on the mosque” a first step towards “rebuilding the temple”.

Last week, Israeli policemen prevented dozens of settlers from entering the mosque area, especially due to the fact that dozens of Palestinians gathered at the mosque to stop any potential attack.

Meanwhile, Hamas spokesperson, Fawzi Barhoum, stated that the settlers are trying to wage a religious war against the Muslims and the Palestinians, and called for a massive revolution to protect Jerusalem, the al-Aqsa Mosque and Palestine amidst ongoing attacks by the settlers, and repeated calls for breaking into the mosque.