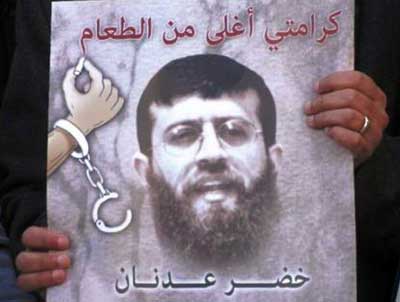 The Palestinian Centre for Human Rights (PCHR) is concerned for the life of Khader Adnan, a detainee in Israeli jails, who has been on hunger strike for more than two months. PCHR calls upon the international community to pressurize Israeli Occupation Forces (IOF) to release Adnan, who has been placed under administrative detention without trial.Khader Adnan has been on a hunger strike since 18 December 2011, one day after his arrest by IOF, in protest to the inhuman detention conditions under which he is held. Adnan had been placed under administrative detention more than once in the past. Since he started the hunger strike, the Israeli Prison Service refused his demands and rejected his release.

Adnan is currently receiving medical treatment at Rebecca Seiff Hospital in Safed in the north of Israel. According to a physician from the Israeli Physicians for Human Rights, as of 15 February 2012, Adnan’s life is endangered because of his continued hunger strike, which has caused erosion of his muscles, including the muscles of heart and stomach.

The internal medicine physician, who checked him five times last week, stressed that Adnan’s body started to release poisons, which in light of the severe weakness of his immunity system makes more likely that he may be subjected to a sudden heart attack. The same physician noted that abstention from having food for more than 70 days inevitably leads to death.

Khader Adnan Mohammed Mousa, 33, from ‘Arraba village near Jenin, who is married and a father of two children, was arrested by IOF on 17 December 2011. The following day, he declared an open hunger strike. On 31 December 2011, he was transferred from al-Jalama interrogation center to al-Ramla Prison. An order was issued placing him under administrative detention for 4 months on 08 January 2012.

A month later, on 06 February 2012, an Israeli judge approved the administrative detention order issued by the military commander, claiming that confidential information indicated that Khader Adnan is extremely dangerous. Ultimately, on 13 February 2012, the appeal judge of Oufar Military Court refused to order Adnan’s release and upheld the administrative detention order.

During this period, Adnan and his attorney have not been informed of the charges directed against him. The Israeli prosecution provided the court with the charges against Adnan under the item of confidential information, which constitutes evidence of the arbitrariness of the administrative detention policy practiced by IOF against Palestinian detainees.

Adnan’s case highlights the conditions of more than 300 Palestinians who are currently placed under administrative detention in Israeli prisons and detention facilities, including the Speaker and 19 Members of the Palestinian Legislative Council.

These actions are in violation of the right of a detainee to fair trial, including the right to receive appropriate defense and to be informed of charges against him. Administrative detention is applied by an administrative order only without referring to a court, thus violating the standards of impartial judicial procedures, including fair trial.

PCHR is concerned for the life of Khader Adnan, who has been detained in Israeli jails, and:

1. Calls upon the international community to pressurize IOF to release him to avoid risking his life;
2. Reiterates its call for the international community to stop systematic serious abuses against Palestinian detainees in Israeli prisons and detention facilities;
3. Emphasizes that administrative detention is illegal and falls under the category of political arrests, constituting a violation of the detainee’s right to a fair trial, including his right to receive an adequate defense and to be informed of the charges against him.