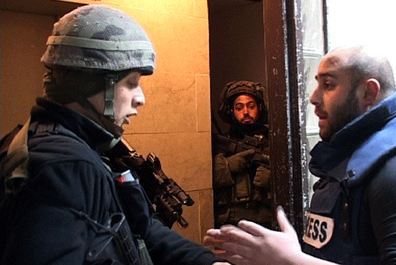 The Israeli military targeted on Wednesday Watan TV, a local Palestinian television station broadcasting from the central West Bank city of Ramallah.“Around 2 am, a large military force surrounded the station building and stormed our offices; at first we thought they are coming to conduct arrests at the nearby Al-Am’ary refugee camp.” Hamza A;-Salaymah, Watan TV reporter, told IMEMC.

“They took our broadcast equipment, computers, financial statements and documents; they forced us to go off-air”, Salaymah added.

Watan TV is a local media agency that also has an online news service and offers press conferences service in Ramallah a city that is under total control of the Palestinian Authority. The station went on-air 15 years ago; this is the second time the TV is attacked by the military, the first time was back in 2002.

The Israeli military claimed that Watan was using unauthorized frequencies, which cause a risk on flights in route to Ben Gurion International Airport.

The Palestinian Ministry of Information issued a Press release condemning the attack by the Israeli military on Watan TV. The Ministry considered the attack an “act of piracy” and “terrorism on media” in addition to being a “clear violation to Freedom of Speech that is guaranteed by international law’.

The Ministry of Information asked the International Federation of Journalists to intervene and protect the Palestinian journalists and media agencies, and also demanded the military to return all stolen equipment.