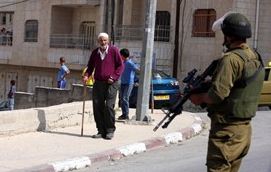 Soldiers also forced the residents out of their homes, and interrogated several youths.

The latest invasions were mainly conducted in the West Bank districts of Nablus, Qalqilia, Ramallah, Bethlehem and Hebron.

On Monday, Amjad An-Najjar, head of the Hebron branch of the Palestinian Prisoner
Society (PPS), reported that Israeli soldiers kidnapped more than 200 residents in the Hebron district, in January and February of this year.