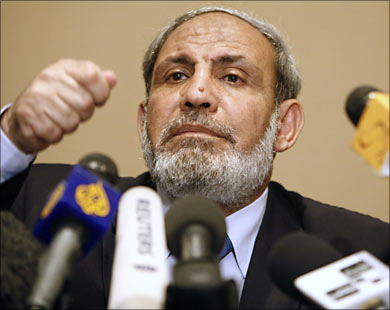 Hamas political leader, Mahmoud Zahhar, stated Thursday that resistance against the Israeli occupation, and all of resistance strategies and methods are strong, solid and ongoing.His statements came during a meeting with the Iranian Foreign Minister, Ali Akbhar Salehi, in Tehran.

He stated that resistance and the full determination will continue to defend Palestine, and the Palestinian rights until achieving liberation.

Zahhar further stated that Arab revolutions in the Middle East and North Africa are “on the path of Islamic goals, and a victory to the Palestinian people”.

He thanked Iran for what he called “the strong support to the Palestinian people and Palestinian resistance factions without expecting anything in return”, according to Zahhar.

On his part, Iranian Foreign Minister stated that the Islamic Republic of Iran fully supports the Palestinian people and their struggle.

According to Salehi, “the Islamic awakening and the developments in the Middle East and northern Africa are boosting the resistance in Palestine, and weakening the Zionist occupation”.