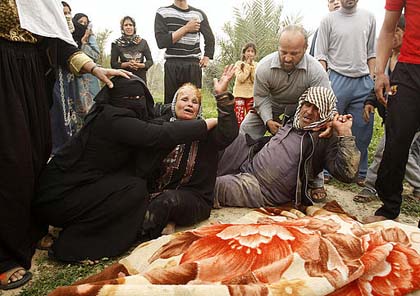 The Palestinian Center for Human Rights (PCHR), based in Gaza, published its weekly report on Israeli violations in the occupied territories in the period between March 8 and 14, 2012, and stated that Israeli soldiers killed 24 Palestinians, and wounded 74, including children and women.The PCHR said that, after Israel started its most recent aggression against the Gaza Strip, the Israeli army carried out 36 air strikes and fired 43 missiles into the coastal region, killing 24 Palestinians, including one child, a woman and two elderly men.

One of the victims was the Secretary-General of the Popular Resistance Committees who was extra-judicially executed after a missile was fired at his car, killing him and several other residents.

The PCHR further stated that 74 Palestinians were wounded by Israeli fire and shells in the reported period, and that 59 of the casualties, including 16 children and 7 women, were civilians.

The arbitrary Israeli bombardment in Gaza led to the destruction of at least 32 Palestinians homes, in addition to a school, a workshop and a center that belong to the Red Crescent Society.

Also, soldiers shot and killed a Palestinian child, and seriously wounded and kidnapped another child, in Yatta town, near the southern West Bank city of Hebron.

The child was killed by army fire as soldiers invaded the town to kidnap a local resident who was released from Israeli detention camps during the prisoner-swap deal between the resistance in Gaza and Israel. The army claimed that the soldiers opened fire after a Palestinian who stabbed a soldier.

Soldiers continued their attacks targeting nonviolent protests against the illegal Annexation Wall and settlements in the occupied West Bank; two peaceful protestors were wounded and dozens of local, Israeli and international peace activists, were treated for the effects of tear gas inhalation. Army also kidnapped a local Palestinian civilian and an international human rights defender.

Israel also resumed its illegal settlement construction and expansion activities in the occupied West Bank, including in occupied East Jerusalem.

Israeli settlers, on the other hand, continued their attacks and violations against the Palestinian people and their property. Settlers also uprooted 40 Palestinian olive trees in Qaryout village, near the northern West Bank city of Nablus.

Extremist settlers also uprooted 240 saplings in Sa’ir village, northeast of Hebron, and took them to plant them in their settlements.

This happened while Israeli troops uprooted Palestinian farmlands in Burin village, south of the northern West Bank city of Nablus.

The Gaza Strip remains isolated from the outside world despite Israeli claims of easing the siege on the coastal region.