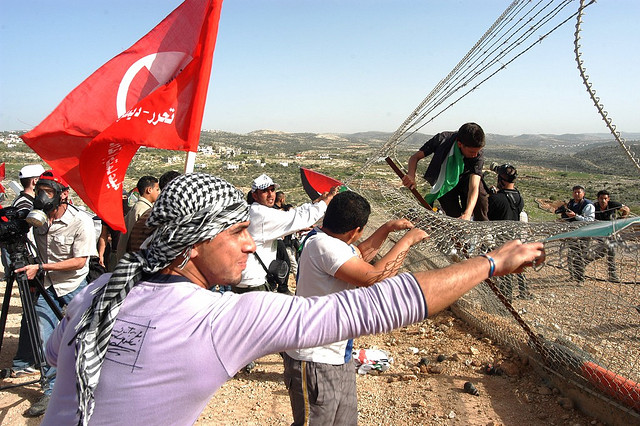 Eight civilians were injured, one seriously, on Friday, while many were treated for the effects of tear gas inhalation when Israeli soldiers attacked anti wall protests in a number of West Bank villages.Protests were organized in the central West Bank villages of Bil’in, Nil’in and al Nabi Saleh.

al Nabi Saleh villagers and their international and Israeli supporters marched after the midday prayers on Friday to protest Israel’s confiscation of their lands to build a settlement. Troops attacked the march before they even left the village.

Soldiers invaded the villages and fired tear gas into people’s homes; many were treated for the effects of tear gas inhalation. Soldiers also sprayed residents homes with chemical water.

Also on Friday, soldiers used tear gas and rubber coated steel bullets to suppress the anti wall protests at the villages of Bil’in and Nil’in. Many there were also treated for the effects of tear gas inhalation.

The Bil’in protest was in solidarity with the recent attacks on Gaza and with Palestinian prisoners on hunger strike. Nil’in also marked the anniversary of the killing of US activist Rachel Corrie by the Israeli army in Gaza in 2003. Nli‘in also marked the anniversary of the injury of US activist Tristan Anderson. He was shot in the head with a tear gas canister by Israeli troops in Nil’in in March, 2009.

Elsewhere In southern West, villagers of Al Ma’ssara, along with their international and Israeli supporters protested the Israeli wall. Troops stopped protesters at the village entrance before they reached lands owned by local farmers but which Israel confiscated to build the wall on. Later troops forced people back into the village using rifle-butts. No injuries were reported.