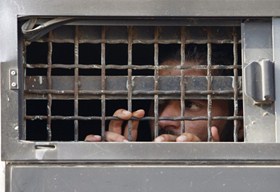 Soldiers fired gas bombs at the detainees, and attacked them with batons; eleven detainees were injured, some of them suffered concussions and fractures, while others suffocated after inhaling gas fired by the army.

One of the detainees, identified as Fares Khalifa, required hospitalization after he was repeatedly beaten by the soldiers, and was bleeding from his forehead. Some of the wounded detainees were identified as Ziad Zahran, Malek Al-Jallad, Mohammad Nuwwara, Hamza Al-Khmour, Ziad As-Seelawi and Eyad Fatafta.

The army broke into sections 14 and 16 in Ofer prison, cuffed the detainees and placed them in small rooms before violently searching their rooms causing damage to the detainees’ property.

Soldiers also sprayed teargas at the detainees in the two sections after they objected to the misstatement they face, and the humiliation they encountered by the soldiers who cuffed and searched them.

The detainees complained after the army cut water supplies in the two sections, and confiscated the detainee’s cooking supplies, before attacking and handcuffing them for several hours.

The Nahshon and Mitzada Brigades of the Israeli army also broke into the detainees’ rooms in Nafha prison and transferred all detainees, held in section eleven, to the Gilboa’ and Ramon prisons without even allowing them to take their clothes and belongings with them.

In a separate attack against the detainees in Nafha, soldiers of the Mitzada Brigade surrounded the detainees who were in the prison yard, and held them for several hours as they holding a protest against the harsh treatment, and repeated violations.

The prison administration then decided to bar the detainees from their visitation rights for a month, and confiscated all electrical equipment from their rooms, and decided to keep them confined in their rooms for a full week, with a one-hour a day break.

Soldiers further broke into the Gilboa’ prison during visitation hour while dozens of families were waiting in front of the prisoner hoping to be allowed to visit their detained loved ones, but instead, witnessed the soldiers in full riot gear, preparing to break into the detainee’s rooms; the families were denied their visitation right and were forced to leave the prison compound.

For the second time in less than two days, soldiers broke into the Asqalan prison and transferred all Hamas detainees to the Ramon and Eshil prisons without allowing them to pack their clothes and personal belongings.

Al-Ashqar said that the detainees announced that they will be escalating their non-violent struggle and that they are determined to remain steadfast until achieving their internationally guaranteed rights.

The detainees will be start by conducting hunger-strikes two days a week in the first stage, and are weighing the possibility of conducting civil disobedience against the prison administration.

Al-Ashqar added that the Israeli Prison Authority will likely resort to more violence , adding that he fears that the army will use excessive force against them, especially since the administration does not hesitate in using gas bombs, rubber-coated metal bullets and even live rounds in addition to physically assaulting the detainees with clubs and batons.

He voiced an appeal to human rights groups around the world to intervene “before it is too late”, and called on the Palestinian people and their factions to hold massive protests in support of the detainees.

Former political prisoner, Palestinian Researcher, head of the Census Bureau at the Palestinian Ministry of Detainees, Abdul-Nasser Farawna, stated in a compressive report published on February 12, 2012, that 202 Palestinians detainees were killed in Israeli prisons and interrogation facilities since Israel occupied the West Bank, the Gaza Strip and East Jerusalem in 1967.

74 of them were executed by the soldiers after they were kidnapped, 7 were shot and killed while in prison, 51 died due to the lack of medical treatment, and 70 died due to excessive torture during interrogation, Farawna stated in his report.