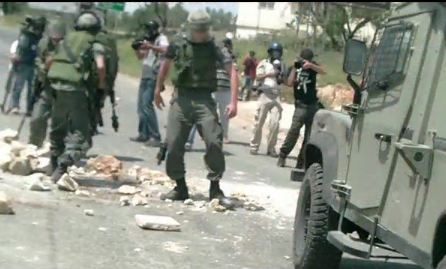 Ambassadors of Portugal and South Africa were treated for the effects of teargas inhalation, in the central West Bank city of Ramallah, after Israeli soldiers fired gas bombs at dozens of local and international peace activists during the weekly nonviolent protest against the Wall and Settlements in Kufr Qaddoum village, near the Ramallah. The two officials were participating in the weekly non-violent protest along with local residents and dozens of Israeli and international peace activists who marched on Friday towards the main gate that was sealed by the army, many years ago, blocking the main entrance of the village, the Ma’an News Agency reported.

Several representatives of European countries and members of the EU Parliament joined the residents in their weekly non-violent protest, along with a number of Palestinian legislators and officials.

As the protesters reached the main gate, soldiers started firing gas bombs at them leading to several injuries, including the two ambassadors. A French peace activist was also injured by a gas bomb that was fired directly at her.

Morad Shteiwy, media coordinator of non-violent protests in Kufr Qaddoum, stated that the army is escalating its attacks against the non-violent protests, and started the deliberate targeting of civilian homes by firing gas bombs at them and spraying them with waste water and other chemicals that produce a foul smell.

It is worth mentioning that Shteiwy was recently released after being detained for seven days for his activities in the nonviolent resistance movement in his village; he was ordered to pay a 7,500 NIS fine.

Furthermore, several injuries were reported as the army attacked nonviolent weekly protests in Bil’in, Ni’lin and Nabi Saleh villages, near Ramallah, al-Ma’sara village near Bethlehem, in addition to several other villages in the West Bank.

The Israeli military use of brutal force against non-violent protests in the West Bank has led to several casualties, including fatalities. The latest fatality was reported in December of last year when the army shot and killed nonviolent Palestinian activist Mustafa Tamimi, from Nabi Saleh village.

On January 1st, 2011, Jawaher Abu Rahma, 35 years old, died from the effects of teargas inhalation after the army violently attacked non-violent protesters, conducting their weekly protest against the Wall and settlements in Bil’in village.

Jawaher is the sister of Basem Abu Rahma, who was also killed by the army during a similar protest in 2009 in Bil’in.

Basem, 30, was killed on April 17, 2009 after an Israeli soldier fired a high velocity gas bomb directly at him hitting him in the chest leading to internal bleeding that caused his death.

His death was caught on tape and clearly showed that he did not attack the soldiers, in any way shape or form, and, similar to his the case of his sister, did not pose any risk on the lives of the soldiers.