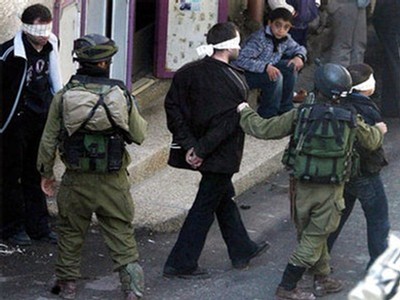 Palestinian sources reported that Israeli soldiers invaded, on Tuesday at dawn, the West Bank districts of Bethlehem and Hebron, broke into and searched several homes, and kidnapped five residents.The sources added that the army invaded Husan town, near Bethlehem, and several nearby areas, after sealing all roads that lead to and from the invaded communities.

Soldiers searched several homes in the invaded areas, and abducted the five residents before cuffing them and taking them to unknown destinations.

Also on Tuesday at dawn, soldiers invaded Rommana village, near the northern West Bank city of Jenin, and searched several homes, including the home of a political detainee identified as Sary Sbeihat, 23 years old.

The army interrogated the family of Sbeihat, and “asked them about his whereabouts” despite the fact that they had taken him a week ago and not released him.

On Monday evening, soldiers kidnapped one resident from Aqaba village, near Jenin, while he was working inside the Green Line. He was identified as Mohammad Abu Arra, 28.

The soldiers also broke into the home of resident As’ad Rifa’ey, and sabotaged the property before asking him about his son Nour, who was not at home during the invasion.

Israeli soldiers invade the Palestinian territories on a daily basis and usually break into and search several homes in addition to abducting a number of residents from various parts of the West Bank, including occupied East Jerusalem.