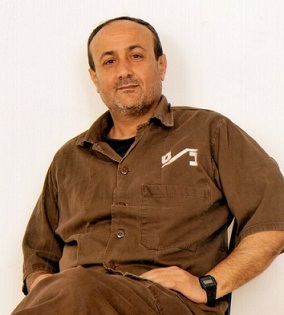 Detained Fatah strongman and legislator, Marwan Barghouthi, sent a letter from his prison cell at the Hadarim Israeli prison, calling on the Palestinian Authority in the West Bank, to stop all forms of security and economic coordination with Israel.Barghouthi stated that the main task of the P.A. is to protect the Palestinians and their well-being, and not to protect the occupation.

He called on the Palestinian leadership to remain determined on the release of all Palestinian prisoners, without excluding a single detainee.

The Fateh leader said that the P.A. should set the release of all detainees as a legitimate precondition for the resumption of peace talks with Israel, in addition to insisting that Israel halts all of its settlement activities, in addition to insisting on a direct and clear Israeli recognition of an independent Palestinian State, with East Jerusalem as its capital, before resuming peace talks.

Barghouthi added that “illusions that the occupation can only be ended through negotiations must stop”, adding that “the political process must be accompanied by ongoing resistance and popular struggle against the occupation”.

On internal political level, Barghouthi said that the national leadership must act on ending all forms of corruption, and on prosecuting all persons, and leaders, involved in abusing power.

“Fighting and countering corruption is part of countering the Israeli occupation”, the Fatah leader concluded.

Barghouthi was detained by the Israeli army in the central West Bank city of Ramallah, on April, 15, 2002; Israel claims that he was behind a number of suicide bombings in addition to attacks against the Israeli army and settlers.

He was sentenced to five life-terms, and additional 40 years, after he was indicted by an Israeli court on charges of “murder and attempted murder” carried by fighters of the Tanzim, the al-Aqsa Martyrs Brigades of Fatah movement.

The jailed official did not recognize the Israeli court, and declared that this court is run by the occupation, therefore, it is illegitimate and illegal as it only serves the interests of the occupation.