Several wounded in nonviolent anti-wall demonstrations in the W.B. 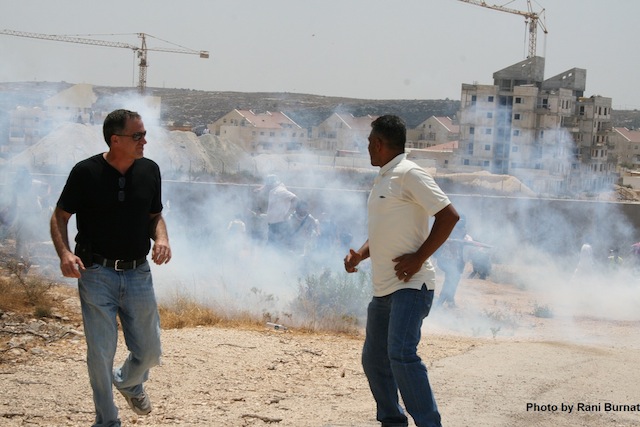 In central West Bank, Palestinians organized anti-wall and settlements protests in the villages of Bil’in, Nil’in and al-Nabi Saleh. Israeli troops used chemical water in addition to tear gas to suppress protesters.Israeli and international supporters joined villagers after the midday prayers at all three locations. Troops used tear gas and rubber-coated steel bullets to stop the protests. Many were treated for the effects of tear gas inhalation and treated by field medic.

In other news, Israeli soldiers attacked the weekly protest at Al-Nabi Saleh village near Ramallah wounding four people including a 9-year old child.
The villagers marched after the midday prayers towards the confiscated lands, however, Israeli troops stopped them by firing several rounds of rubber-coated steel bullets and a number of tear gas canisters. Nine-year old Mohammad Tamimi was hit in his arm with a tear gas canister and was moved to the hospital for treatment.

Three others were wounded with rubber-coated steel bullets however, their wounds were described as minor.

In northern West Bank, at the village of Kufur Qadduom, villagers accompanied by international supporters were attacked with tear gas as soon as they reached the road block isolating the village form the surrounding villages and towns. Local sources said that several residents were treated for the effects of tear gas inhalation.

Meanwhile on Friday, in southern West Bank, several residents were also treated for the effects of tear gas inhalation when Israeli soldiers attacked the villagers of Al Ma’sara as they organized their weekly anti wall and settlements protest which called this week for boycotting Israeli products.

Residents and international supporters marched near the construction site of the wall and were faced with tear gas fired by Israeli troops operating in the area.