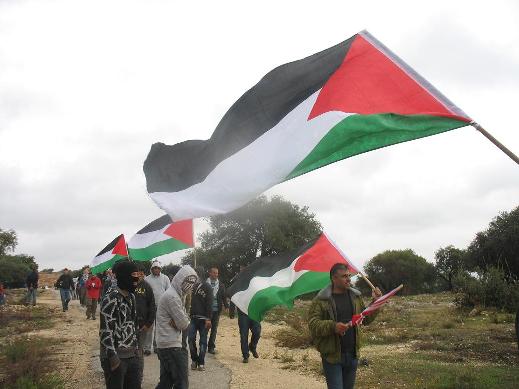 Dozens of protesters suffered the effects of teargas inhalation as the soldiers fired gas bombs and concussion grenades at the nonviolent protesters.

The protest was organized by the Popular Committee Against the Wall and Settlements in Bil’in; this week, the protest came in solidarity with the Palestinian people in Gaza, and carried the title “Victory of Gaza”; dozens of Israeli and International peace activists participated in the protest.

Similar to every week, the protest started following Friday noon prayers at the center of the village, and the protesters marched towards the Wall while raising Palestinian flags and chanting for resisting the illegal occupation of Palestine, the removal of the Apartheid Wall in the West Bank, the liberation of all Palestinian political prisoners held by Israel, and condemning the Israeli war and aggression on Gaza; they also chanted for unity among all Palestinian factions.

As they arrived at the Abu Lemon area, close to the Annexation Wall, some protesters managed to break through the barbed wire by cutting parts of it, and the soldiers, stationed on the other side of the concrete Wall, fired teargas bombs, rubber-coated metal bullets, sounds bombs, and also sprayed them with waste-water mixed with chemicals.

Furthermore, Israeli soldiers chased local youths in an attempt to kidnap them, and also attacked reporters of the Palestine TV, and confiscated some of their equipment.

Later on, violent clashes, lasting for several hours, took place between the youths and the soldiers, local youths hurled stones at the army and the soldiers fired more gas bombs, concussion grenades and rubber-coated metal bullets.

The Popular Committee Against the Wall and Settlements in Bil’in issued a statement saluting the steadfastness of the Palestinian people in Gaza, and called for complete unity among all Palestinian factions to counter the illegal Israeli occupation of Palestine, Israel’s illegal Wall and its illegal settlements.